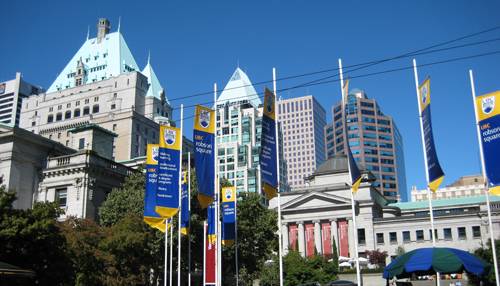 There are several wonderful attractions within a few hours of Vancouver.  Whistler Mountain, along with Vancouver, is the site of the 2010 Winter Olympics.  Whistler is 100 km (60 miles) north of Vancouver and is the biggest and most varied ski area in North America.  Its ski areas are open from mid-November until the end of the spring.  Mountain biking and golf are Whistler’s primary off-season sports, and both are world class.

There are lots of fun events in the village including wine tasting tours, and the party and music scene are fantastic year round.  Another popular day-trip adventure is white water rafting.  Many guided tours give visitors a chance to raft on rivers cutting through deep canyons in some of British Columbia’s most majestic wilderness environments.  And there are many more sights to see in the capital city of British Columbia, Victoria, including the world famous Butchart Gardens and whale watching tours.  The scenic ferry cruise from Vancouver and through beautiful Active Pass and the Gulf Islands is worth the trip by itself.

Vancouver has many specialty museums, theatres, galleries, and historic sites.  Especially popular are the UBC Museum of Anthropology, the Maritime Museum, the H.R. MacMillan Space Centre and Planetarium, and the Vancouver Art Gallery.

Specialty movie theatres include the CN IMAX Theatre, which has a 5-story high screen that gives moviegoers the sensation of being right inside the film; and the Alcan OmniMax Theatre at Science World, which has a screen of similar size that curves around moviegoers to immerse them in a 360 degree film experience.

There are also a number of museums with a sports theme including the British Columbia Sports Hall of Fame, the British Columbia Golf Museum, and the Granville Island Museum of Sport Fishing, Model Ships, and Model Trains.  For those interested in Vancouver’s maritime heritage, you can tour the boardwalks and piers of picturesque Steveston Heritage Fishing Village, which is a 19th-century frontier seaport that is still active more than 100 years later, and visit the Britannia Heritage Shipyard.